Red Teaming In a nutshell

Hi everyone I Hope everyone is doing good. There are many types of teams but today we are going to cover Red Teaming without further ado let's get into the topic.

What is Red Teaming?

A red team is formed to identify and assess vulnerabilities, testing assumptions, viewing alternate options for attack, and revealing the limitations and security risks for an organization. This designated group tests the security posture of your organization to see how it will fare against real-time attacks before they happen. Because of their roles as the attackers, teaming exercises are sometimes also referred to as red-teaming. All through a red team test will always expose bugs and impacts regarding that bug. The purpose of conducting a red teaming assessment is to demonstrate how real-world attackers can combine seemingly unrelated exploits to achieve their goals. In red teaming networks, routers, switches, etc, etc. hehe, a simple thing is that Red Teaming refers to offensive things. But red teaming and penetration are different things. Nothing's out of scope in red teaming. OSINT, Exploitation, Pivoting... Everything's covered all we have to do is go as further as we can.

How Does Red Teaming work? 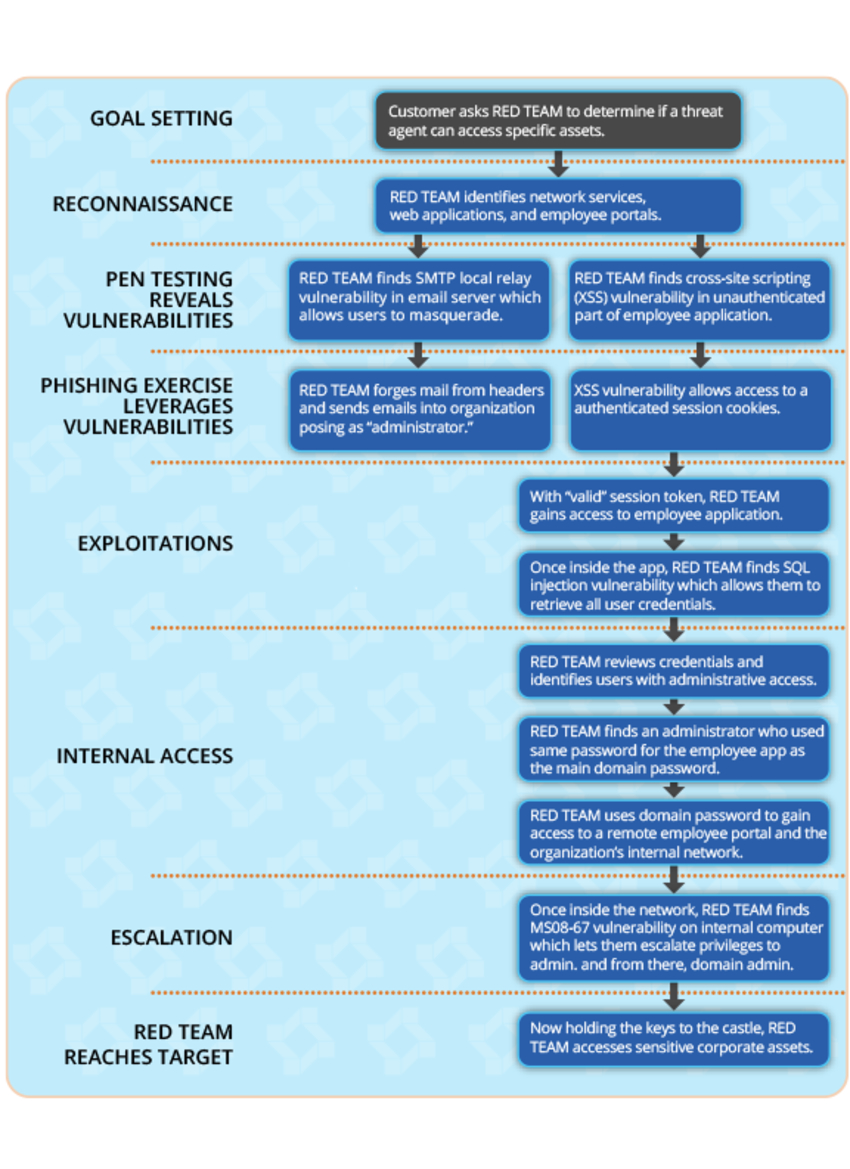 The first phase in a red team operation is focused on collecting as much information as possible about the target. Reconnaissance, aka Information Gathering, is one of the most important steps. we can use tools like Maltego, LinkedIn, Google, Accounts( Twitter, Facebook), Google Earth, Nmap, Nikto, Passive Recon, Spider foot, Shodan, etc. Will get a lot of information about the target.

Weaponization is the process of developing and using tools to attack the target, through information which we got in the first stage. we can also use some techniques it is a good practice tho. Weaponization basically to create payloads, infecting files, and all stuff before sending to the victim and converting that file a good payload for delivering to target.

Deliver stage is a kinda hard stage you can say because its the stage of execution of your payloads, exploits. It's like the launch of the operation here red team guys do their activities to reach the main goal. Things like social engineering face-to-face targets, analyzing cyber vulnerabilities, planting hardware trojans for remote network persistence, etc.

The exploitation you can expect through the word. On this Stage red teamers break into or compromise the servers/networks/applications, access on physical things, and bypassing their security example-: gates, fences, locks, radar, motion detection, cameras.

In this Stage Red-Teamers take steps for remote access to exploited systems are stable for setting the stage for data exfiltration and other post-exp stuff. Also to create backdoors.
Data exfiltration occurs when malware and/or a malicious actor carries out an unauthorized data transfer from a computer. It is also commonly called data extrusion or data exportation

During this stage Red team aims to complete the mission and realize and agree on the polici which is set by client for Red Team Sec. From hacked systems and physical security controls including video recording, audio recording, clicking photos to prove that the vulns was discovered.

Responsibility of a red teamer

Red teaming does bring responsibilities, to bring value to your work, helping blue teamers in increasing the bar of defense is something a red teamer should also do. Infosec community is about helping each other and making the internet secure.

Red Teaming In a nutshell
0
0
Security1